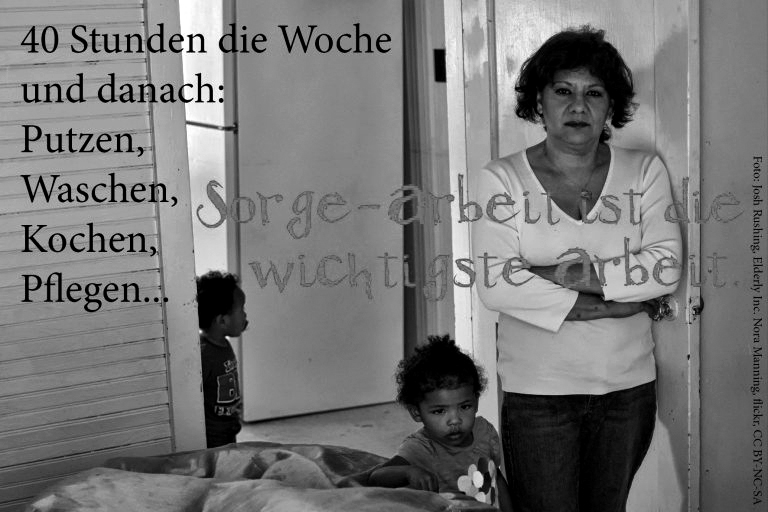 The Leipzig-based think and do tank Konzeptwerk Neue Ökonomie organised a 3-day conference on care and degrowth called “Für den Wandel sorgen” (which roughly translates to: Caring for change). The conference really was special in the ways in which it put its topic to practice – there was a children’s programme and childcare all throughout the weekend so that many young parents could take part, the conference fee was based on contribution to enable everyone interested to take part, and the food was taken care of an activist refugee kitchen just in its formation.

I had the opportunity to take part for the first two days of the programme, which involved different formats such as workshops, presentations, group discussions, and a theatre performance. The theatre collective wilde pferde showed a piece on motherhood (Supramater), which looked critically at two propagated models of female parenting – the stay-at-home-supermum vs. the career-great looks-supermum. Most of the text was taken from quotes collected during a thorough research amongst parents, so it was very close to reality and the struggles I know myself so well from being a mum myself.
A workshop on feminist degrowth perspectives based on the Bielefelder school’s thoughts (such as Maria Mies, Veronika Bennholdt-Thomsen and Claudia von Werlhoff, et al) was particularly interesting for me, as I learned many new things on this approach – for example, to differentiate between the first and second generation of the subsistence perspective, where the second generation’s ideas can be found in today’s urban gardens, repair cafés, and such and in the theories by Andrea Baier and Christa Müller (whose book ‘City of Commonists’ I’ve had on my shelf since 2013). The second day ended with a fishbowl discussion and a workshop phase, where people discussed different ideas of how care could be organised more collectively on one side, and how care and degrowth could possibly work together towards similar goals.