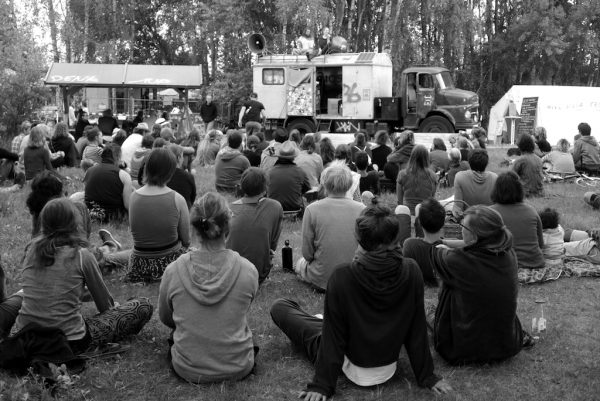 End of June 2017, a 5-day gathering of alternative movements called MOVE UTOPIA took place for the first time on Kulturkosmos Müritz, a festival site in rural Eastern Germany. The main aim of the get-together is to join forces with each other in the struggle for similar goals: “a world according to needs and abilities” that leaves the current capitalist system and market logic behind.

Some AoA collaborators had the pleasure to be part of the planning process and programme, Frauke and Katharina amongst others. The gathering was a great learning journey which now continues in its aftermath. The idea started to gain traction during a world café at the conference UTOPIKON, where a group of diverse people as individuals and from a variety of movements, such as BUKO, living utopia, yunity, and Konzeptwerk Neue Ökonomie, began to take shape. Soon after, the concept was written, a collaborative platform set up, and a plan (of sorts) for the next six months laid out – not a lot of time for organising a money-free gathering for 1000 people!

The programme consisted of over 140 contributions in response to an open call in existing networks. They covered a variety of themes and approaches: from theoretical ones such as the commons, gift economy, value critique, methods, and infrastructure over to cultural ones such as art, theatre, music, singing, meditation and yoga. As such, there were possibilities for both the inner and outer transition with theoretical and practical inputs from different movements such as (eco-village) communities, the rainbow family, money-free activists, degrowth, commons, p2p, the autonomous left and queerfeminism. Quite a diverse mix, which at times resulted in hippieresque singing circles parallel to fireworks accompanied by solidarity chants, causing both irritation and curiousity. Contradictions were an intentional part of the assembly to start approaching each other with tolerance and mutual understanding. Care work was inherent part of the meeting – everyday, there was a time slot dedicated only for chopping up veggies, taking care of the kids, oneself, etc. 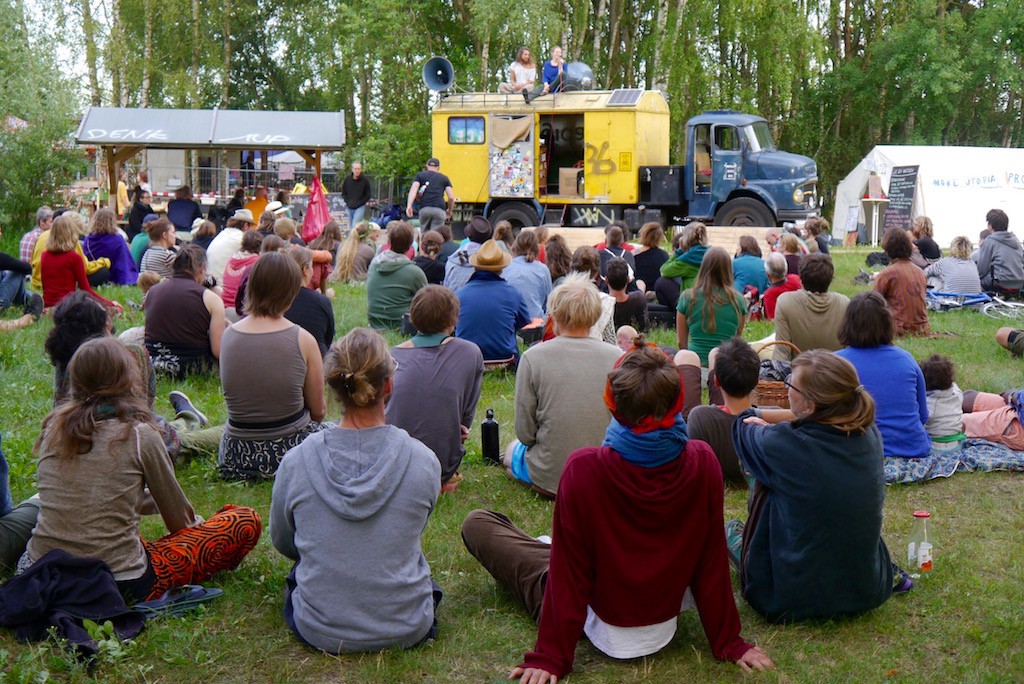 The planning process of MOVE UTOPIA in itself was an experiment – not many of the core organising team knew each other from before and everybody brought in some experiences from their movement. Finding consensus, moderating meetings, organising in base-democratic work groups (AGs), with everyone involved working on a “voluntary”, as in unpaid, basis was a challenge to all of us. The get-together was supposed to be a largely self-organised space where no money was involved – all participants were makers at the same time, contributing their skills during the assembly where possible.

What did we learn for the next time? From my perspective, we need to share responsibilities on more shoulders, and shift them throughout the process so that people don’t get stuck with just one task. This would add to everbody’s learning curve as people could take over activities they might normally not do. Furthermore, the challenge of organising the whole assembly without money sometimes made things a lot more difficult than necessary, considering that we still live in a system running on exchange. Nevertheless, it was a great experience that showed how much ‘unlearning’ still needs to be done – of our social habits, mindsets, and practices that are so deeply ingrained in ourselves.